When we introduced MineSaga 3.0, we also introduced global quests which would randomly pop up a couple of times a day where the first player to complete it would receive the rewards. We really liked this idea and we think that you guys do also hence why we have released this new update, Missions.

What are Missions?
Missions is essentially a twist on the global quest idea. Every 24 hours, 3 Missions will appear that you can complete in order to gain a reward. When you login, a message will be sent to you to remind you if you have Missions left that have not been completed yet.

Everyone on the server will receive the same Missions everyday. You can view these at /missions. You will see the nether star which is just a little information piece and then 3 Missions. The 3 Missions that are displayed are the ones you can complete. 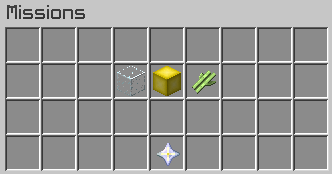 There are 19 different Missions, with 5 tiers for each Mission. I will list them all below so you can know what to expect. Once completed, the Mission will be marked as complete and you will get the randomly selected rewards that could range from Island levels to crate keys.

Missions
As I said above, I will list all the Missions that are currently available to complete below. In total there are 95 Missions I believe! I will not be listing everything you need to do, but I rough guideline as to what each Mission is.

Mineral Master (I - V)
Mine a bunch of valuable blocks such as gold ore and Iron ore.

Bolt (I - V)
Walk certain distances around the server.

Baker (I - V)
Break wheat and use it to craft bread.

Skeleton Slayer (I - V)
Kill skeletons and use their loot to craft bone meal.

Lumberjack (I - V)
Break a selection of different trees.

Adventurer (I - V)
Walk around the server and kill mobs along the way.

Detonate (I - V)
Kill creepers and use their loot to craft TNT.

Gold (I - V)
Everything to do with Gold, mine gold items, craft gold items etc.

Those are all the Mission categories we have for you. Each category has 5 different missions, I, II, III, IV and V. The higher the level, the harder it is to complete.

We hope you enjoy this update, we just thought it would give you guys a little something else to do for a small reward when you login every day rather than going AFK. If you have any other categories that you would like to see in the future feel free to make a suggestion thread!

This update will be available on your realm when it next reboots!

omg this is so cool [Owner] System. Cant wait to play this!!!!

PrankingYou said:
I can't wait to experience this update. It looks so cool!
Click to expand...

Neither can I [Senior mod] PrankingYou. Looking forward to seeing you playing it. Maybe we can play together

Commander
Marquess
Wizard
Epic
Wanted
Triceratops
Whst are the rewards for these??

WaterGrenade said:
Whst are the rewards for these??
Click to expand...

it says island levels to crate keys so can be anything

Staff member
Senior Mod
Plus
Saga
Commander
Cowboy
Tyrannosaurus
Marquess
Wizard
Epic
Pro
Nice to see something that might turn the server away from afk2win!

Cowboy
Triceratops
Warden
Pilot
Viscount
Sorcerer
A few of the missions seem to be broken at the moment. I've tried the Grind mission on Jurassic (placed 10 spawners, received more than $300k payouts), and it doesn't complete. Also the Engineer V mission on Mystic. Crafted and placed everything, and it doesn't complete. Others have worked, and they're really cool. I like the update in general -- it adds something fun to do.
S

Brent said:
A few of the missions seem to be broken at the moment. I've tried the Grind mission on Jurassic (placed 10 spawners, received more than $300k payouts), and it doesn't complete. Also the Engineer V mission on Mystic. Crafted and placed everything, and it doesn't complete. Others have worked, and they're really cool. I like the update in general -- it adds something fun to do.
Click to expand...

For Grind, you need to actually place the spawners, it doesn't currently support merging into other stacks, but I will add this.
As for Engineer, they all have a bug where it's not detecting placed redstone, this will be fixed for reboots.

Thanks for reporting them
You must log in or register to reply here.